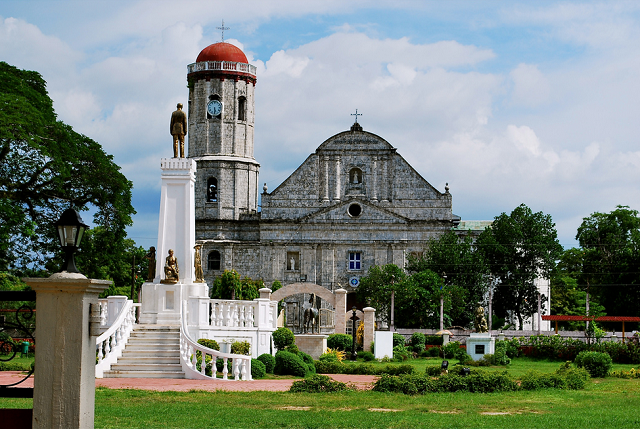 Dumanjug church is probably the most handsome of the 19th century churches in western Cebu. Made of finely cut coral, its hews closer to the neoclassical idiom for the sedate and chaste simplicity of its decorative elements. The bell tower to one side of the church has a dodecagonal plan, usual for colonial churches. Although made of three stories the floors are unusually high; this is a general characteristic of the church. The engaged pilasters only add to the general sense of height. The facade’s lofty elevation is broken only by double pediment.
Established as a parish on 28 March 1854, Dumanjug had as patron Saint Francis of Assisi. It was formerly a visita of Barili. Redondo (1886, 163) describes the Borbon church made of rubble and of new construction, measuring 40.5 fathoms long, 8 fathoms and two palmos wide and 7 fathoms and one palmo tall. The church was cruciform, roofed with tile and bell tower under construction.
This old structure was completed in 1864, as engraved at the main entrance. Its construction started in circa 1854, when the Dumanjug Mission Post was elevated into a parish.

The work was commissioned by the Spanish Bishop Romualdo Jimeno, O. P. and was undertaken by the pioneerring Pilipino Secular Priest, Rev. Fr. Matias Cabrera and Doroteo Godinez, with the freelabor support of the early natives.
The basic materials used are sea corals stone, limestone and Balayong (native black wood) which were abundant in the area then.
It is interesting to note that this is one of the few old church structures in Cebu and probably in the whole Philippines, which was designed, executed, supervised and completed by Filipinos themselves.
The year 2004 marks the 150th Founding Anniversary of the parish with St. Francis of Assisi as the titular.