GEOGRAPHICAL  LOCATION
Dumanjug is a 3rd class municipality in the south western portion of Cebu Province and is 73 kilometers from Cebu City. It takes about one and a half hours travel by private cars and two hours by public transport from Cebu City to reach the municipality.

It is situated within the geographic coordinates of 10°01’ 07” to 10°02’00” north latitude and 123°24’11” to 123°32’15”east longitude bounded between the Municipalities of Barili in the north and Ronda in the south. On the eastern border are the Municipalities of Sibonga and Argao while on the western side is the Tañon  Strait.

It is politically subdivided into 37 barangays of which 8 are coastal.  Its population is 44,807 based on 2007 census. Dumanjug  has gained importance as the gateway transhipment point between south western Cebu and northern Negros Oriental where business and trade are present.

Based on the Cadastral Survey Map of the Department of Environment and Natural Resources (DENR), the Municipality has an effective land area of 8,544 hectares. It has a total number of 37 barangays:  Barangay Tubod-Duguan, having a land area of 556.69 hectares being the biggest, and Barangay Sima ,with a land area of 85.16 hectares being the smallest.  There are eight coastal barangays namely: Kanyuko, Bitoon, Tangil, Tapon, Poblacion, Looc, Calaboon and Camboang.

Majority of lands are classified as alienable and disposable (A&D). Only a portion of the central western area of the  municipality is timberland. The timberland area, however, in the municipality is confronted with technical problem like actual use. Such  agriculture.   A small portion in the eastern and coastal area of the municipality, on the other hand, is reserved for fishpond purposes.  Several forestry – related programs are being introduced by the Department of Environment and Natural Resources (DENR) in the area. 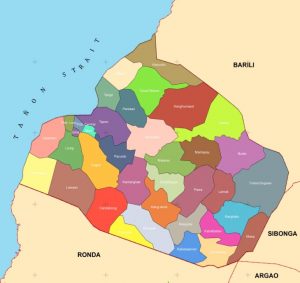 The terrain of Dumanjug is generally a mixture of plain land to rolling hills and sloping mountains. About 37.18% of the land is within 8 – 18% slope  followed  by  31.02%  of the land area within 30 – 50% slope, which is considered as steep slope. The rest of the area are relatively plain to rolling.

The municipality is enjoying the services of a Level I,II and III water system.  Various private associations are managing the water system of some barangays. The majority, those which are not serviced by the municipal water system, are managed by the Barangay themselves.  Only few are still using the artesian well as water source.

Dumanjug has only one river system with head water from the Municipality of Sibonga and drains to Dumanjug.  The entire river system is known as  Bogasok river.

The town of Dumanjug belongs to third type of climate, which is characterized by no very pronounced maximum rain period, but with a short dry season lasting from one to three months.  The distribution of rainfall shows that March to April is the relative short dry season and heavy rain falls in October.  The municipality is sheltered from the northeast monsoon and trade winds.  However it is exposed  to southeast monsoon for at least to frequent storms.

There are five (5) types of soil in the Municipality, namely: the Hydrosol, the Lugo Clay , Bolinao Clay, the Faraon Clay, and the Mandawe clay.  Lugo and Bolinao Clays are the dominant soil types in Dumanjug, covering almost ¾ of the entire municipality.  These soil types traverse from the southeastern to the northeastern  and southwestern parts of the Municipality.

Majority of lands are classified as alienable and disposable(A&D). Only a portion of the central western area of the  municipality is timberland which is currently used  for agro-forestry productions.

Actual land uses of the entire municipality showed that a large portion of the land is devoted to agricultural production with an area of 4,755 has. and followed by built – up area covering 1,145.44 has.  The rest of the area are utilized for residential, commercial, foreshore and forest land.